Mocks Server v2.x introduced the concept of "route variants", and made more restrictive the way for organizing mocks and routes files. It also introduced other improvements, as the possibility of using express middlewares, made simpler the core API, etc.

All of these changes made very difficult to handle old v1 behaviors and fixtures together with the new format of routes, so, in order to maintain backward compatibility, Mocks Server v2 can handle two folders at a time, one containing v1.x fixtures and behaviors, and another one containing v2.x mocks and routes.

This was made with the intention of allowing users to migrate progressively from v1.x format to v2.x format. You can convert old fixtures and behaviors into new mocks and routes and move them from one folder to another, until you have no more legacy code, and you can deactivate the legacy folder.

When the same route is defined in v2.x "routes" and v1.x "fixtures", the "fixture" will be ignored, and the "route" will handle the request.

Now, when the interactive CLI is started, settings and actions related with legacy mode will be displayed also: 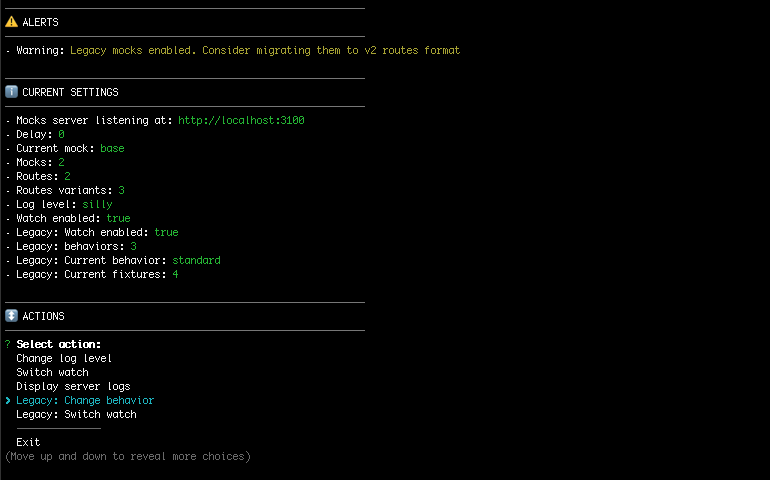 After reading the v2.x routes and mocks documentation, you would have noticed that old fixtures having the same "path" can be easily migrated to a new route.

Continuing with the previous example, once you have migrated your "fixture" to a "route", you can add it to a new "mock".

You would normally have several fixtures in each "behavior". So don't delete the "behavior" until you have migrated all of the "fixtures" that it contains. Simply remove the migrated fixtures from it and let the rest. Mocks Server will use "routes" with priority, but when a request does not match any of them, it will fallback to "fixtures", so you can migrate them progressively.

Next options should be used only for backward compatibility with v1.x, and will be removed in next major version:

Next mocksServer methods and getters are provided only for backward compatibility, and will be removed in next major version:

Some options and methods that were already deprecated in v1.x have been definitively removed in v2.x.