Mocks Server
This is documentation for Mocks Server 1.9.0, which is no longer actively maintained.
For up-to-date documentation, see the latest version (2.2.0).
Version: 1.9.0

As mentioned, fixtures and behaviors can be also defined using javascript, which gives the possibility of reuse portions of them, or even create them programmatically.

In this chapter we are going to repeat the same steps than in the "Defining fixtures and behaviors" guide, but now we are going to create all using javascript instead of json files.

Remember that you can combine json definitions with javascript definitions at your convenience in the mocks folder.

Create a /mocks folder in your project root, containing a behaviors.js file, and a fixtures/users.js file:

Now we are going to add a fixture to the /mocks/fixtures/users.js file, which will be used when GET requests are received in the /api/users path or our "api mock":

Import your recently created getUsers fixture in the /mocks/behaviors.js file and create an "standard" behavior containing it. Read more about how behaviors are defined using javascript here.

The interactive CLI will be started: 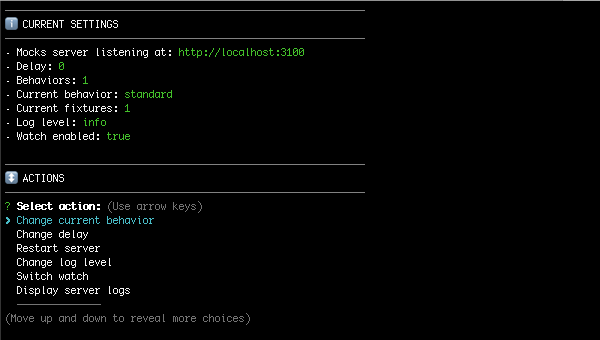 Browse to http://localhost:3100/api/users to check that Mocks Server is serving your users collection fixture at the expected url. You should see the response in your browser:

Add fixture for getting an specific user#

Now we have the mocked the response for the "users" collection. Let's add the fixture for getting an specific user:

Add the fixture to the "standard" behavior. Now we will use the id of the fixture as a reference instead of providing directly the fixture object itself, which is also supported:

The Mocks Server is watching for file changes, so your fixtures should have been refreshed automatically.

Browse to http://localhost:3100/api/users/1. You should see the response in your browser:

But... even when you change the user id in the request, (http://localhost:3100/api/users/2) obviously the response will be still the same:

Well, this is the expected behavior of a mock server, but you can add a new "behavior" to change the response:

Let's add another "GET user" fixture, but now it will be always responded with the second user:

And let's add a new Behavior extending the standard one:

Now the Mocks Server CLI indicates that it has two behaviors available.

Use the CLI to change current behavior:

Browse to http://localhost:3100/api/users/2. You should now see the second user: